Bayonetta 2 is not the kind of game that will be for everybody. It’s silly, suggestive, and sometimes a bit awkward to play with others in the room. Despite this however, as far as video games go, Bayonetta does so many things right, that it’s very easy to get over those points. With character action games, it’s hard for the people at PlatinumGames not to come up, as they are the same developers of such games like Vanquish, Metal Gear Rising: Revengeance, and MadWorld. They released the original Bayonetta back in 2010 and created a cult classic that easily rivals the Devil May Cry and God of War franchises. Introducing an interesting protagonist that doesn’t mind showing a bit of skin, stylish action, and tons of depth in the combat, they created a formula for a fantastic game. Now, four years later, we finally have a sequel, exclusively released for the Wii U thanks to Nintendo publishing the title. 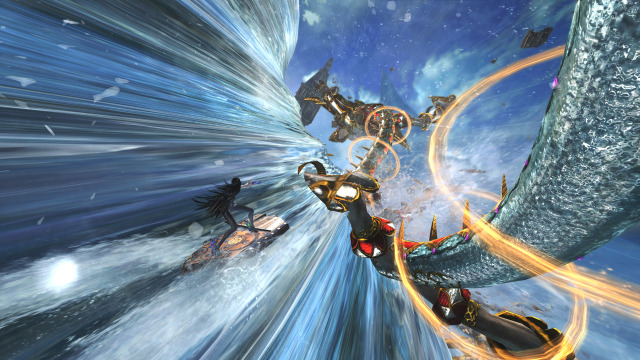 Bayonetta 2 continues the trend of visually-stunning gameplay, using all of the experience that Platinum has from their somewhat extensive time in creating hit games, culminating it into one brilliant package. Bayonetta has more weapons, more summon creatures, more transformations, and more moves than ever before. The combat is very easy to learn, giving players plenty of opportunity to improve throughout the game without punishing them with difficulty. Hardcore players that wish to improve their scores will find much more to the game as they find new ways to improve and master the combat.  With a bit of practice, most gamers should be able to stylishly dance all over the battlefield in a glorious display of bullets, sparks, and just the right amount of blood.  The game is stunning to look at, partially due to it’s great art design and visual style, and runs at a framerate that manages to handle all the action without dipping below 30 fps. 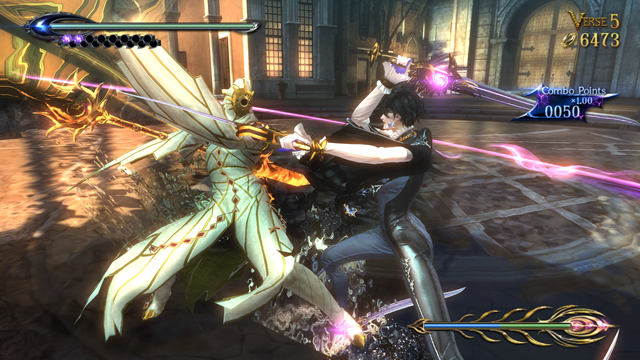 Bayonetta 2 has a somewhat ridiculous story, having our protagonist racing to Hell to save her friend from a terrible fate in the afterlife. Throughout the story, we discover new and old characters, interesting plot twists, and more reasons to see epic action unfold in a beautiful display.  Even though the story isn’t going to win any awards, it keeps the spirit of the game going in a fast-paced and enjoyable thrill ride, which is all that really matters. The game plays out in chapters of various lengths, and within those chapters are one or more “verses”, each offering a piece of action to get ranked on. It’s very possible to miss a verse in a chapter, and even possible to miss new weapons and items because of this, but that’s okay, because it gives a reason to want to explore more that the game has to offer.  Once the chapter is over, you’ll get an overall rank based on the ranks of all the verses played, earning better rewards for better ranks. 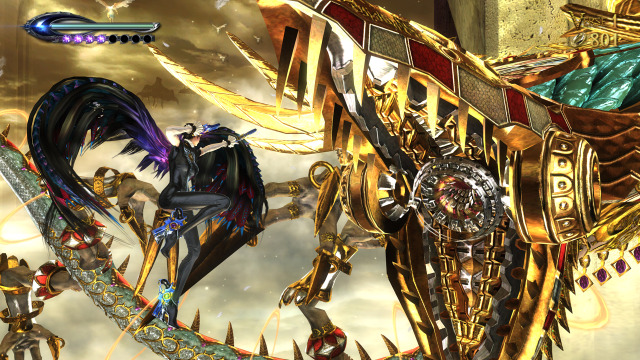 Perhaps one of the best qualities of the game is that it feels like a complete package. The game is packed with tons of content, giving players dozens of things to unlock including costumes, characters, and special weapons. Special Nintendo costumes are both fun and effective as well. After the main game, there are Witch Trial stages, extra difficulties, as well as a new multiplayer mode called Tag Climax. With this mode, you’ll either play with a CPU partner or an online player, working your way through six battle stages to gain halos to spend on more items to unlock. If you play well and play on higher difficulties, your efforts will be rewarded with bigger payouts. It’s a fun little distraction and gives the game more replay value, and it doesn’t feel tacked onto the overall package since the main story does have moments where you’ll work together with the CPU. 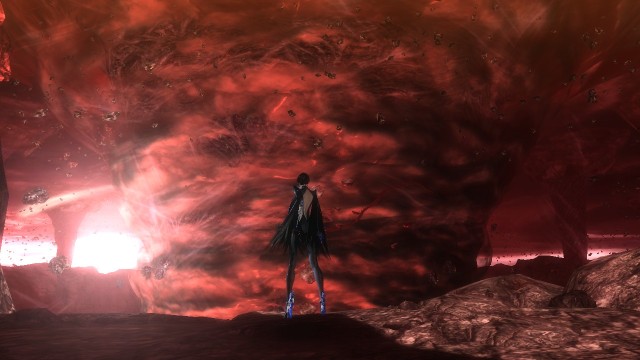 Despite the good, that isn’t to say there aren’t any flaws. The game does introduce Bayonetta to underwater areas, and while there aren’t a lot of them, it does create difficulty with some of the combat verses. At least it’s not a huge issue that makes the game unplayable, but in such a polished game, I would’ve liked a little more attention to making that work better. I also feel I have to point out that even though I find the presentation to be excellent, there are special cutscenes that play in a stylish clock theme, and it seemed like the video quality was poorly compressed, offering some lower quality visuals in an otherwise beautiful game. Again it’s a minor thing, but I know the team at Platinum could have done better. At least it doesn’t take anything away from the fun that the game has to offer, giving players a full package that doesn’t ask for more of your money.