The Corsair Gaming K70 RGB keyboard is the company’s newest Cherry MX mechanical keyboard. It features customizable backlighting, granting users 16.8 million color options per key. This is likely to draw in several who want a fully customizable keyboard, however the perk comes with a price tag to match at $169.99.

The Corsair Gaming K70 RGB keyboard features a standard layout, and I must admit that I rather liked the volume slider rather than having two separate buttons. I also appreciated the risers on the front edge of the keyboard, and Corsair gets credit for including these (something I’ve honestly not seen on any keyboard until I tested this unit).

After plugging the Corsair Gaming K70 RGB keyboard in and attaching the palm rest, I immediately began testing it out. I opted to try it both with and without the Corsair Utility Engine (more on this software later), and immediately launched into a game of League of Legends to see how it held up. To my satisfaction, the keyboard was extremely responsive and I had no issues with my fingers slipping off of the keys. I proceeded to put it to the test in Warlock, FEAR, Silent Hill 3, and even a typing test in Microsoft Word, and I am pleased to say that it passed every test.

The Cherry MX Red switches that the keyboard I received come with feature a smoother and quieter typing experience than the Blue or Brown switches you can get. Combine this with the sturdy build of the keyboard and the matte finish on the keys (which does a fantastic job of keeping fingerprints and smudges off of the keys) and the keyboard feels quite nice.

Those who prefer the Blue or Brown switches won’t be left out in the cold, however. The Corsair Gaming K70 RGB keyboard will be available with these switches as well. The final thing I would note is the lack of the contoured arrow and WASD keys that the standard K70 featured. 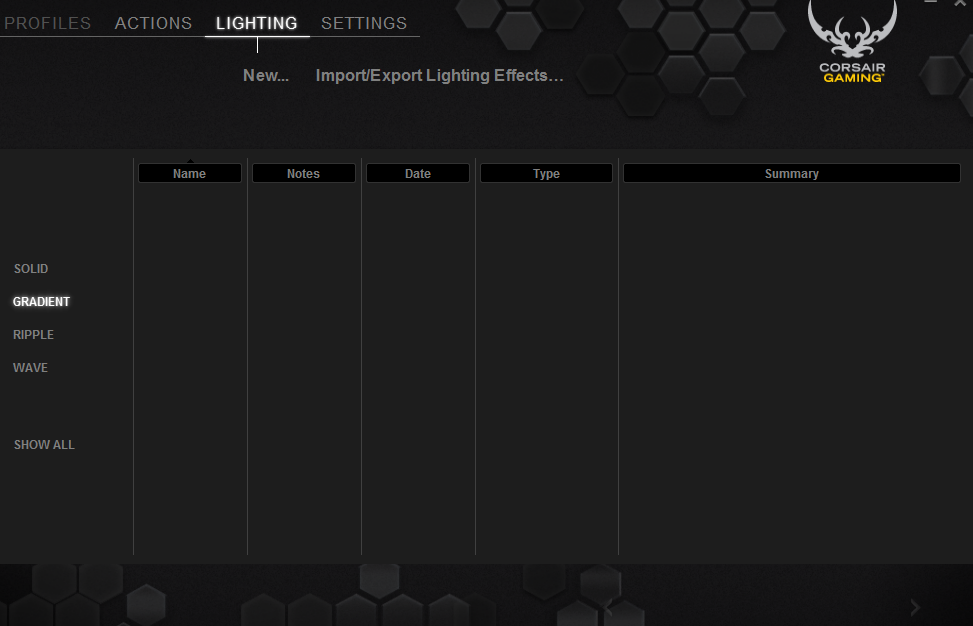 A glance at the Lighting screen in the Corsair Utility Engine.

After putting the Corsair Gaming K70 RGB keyboard through its paces without the Corsair Utility Engine installed, I downloaded the software.  I had expected it to come with at least a few profiles built in, but I was disappointed. The CUE did not come with any preloaded, although you can download profiles from other users, and Corsair has even set up a dedicated forum for users to share their own, unique profiles. One user by the name of Smsumodude20 (thanks, Smsumodude20, for creating this profile.) recreated the rainbow wave that Corsair showed off when they debuted the K70 RGB keyboard, and you can see a video of this profile below:

I opted to install the firmware update for the keyboard after I messed around in the software for a bit, noting, as I did so, that it is simple to manually download any firmware updates you may wish to.

The software suite features four tabs; Profiles, Actions, Lighting, and Settings. I was eager to start playing around with the lighting settings to see what kind of unique layouts and effects I could create. I was a bit surprised, however, to feel rather lost when it comes down to the backlighting. I felt somewhat relieved and somewhat overwhelmed when I downloaded the Corsair Utility Engine’s 142 page user manual.

This manual is optional for those who don’t wish to delve into the lighting effects, but if you do want to untangle the hierarchal structure of foreground lighting, background lighting, built-in dynamic lighting effects, and their interactions, it is necessary to comb through it. Corsair also has a few videos on their channel to help you make sense of a few things. Once you have figured out how things work, it is shockingly easy to lose track of time as you attempt to completely customize your unit.

In addition to the lighting effects, the CUE allows you to fully program  the keys. This process is much simpler than the lighting, and can be quite handy for several MMORPGs.

Overall, the software is good, but requires a rather steep learning curve. It would have been nice if Corsair had included some profiles in the software automatically to serve both as a reference and as an easier way for those who don’t want to spend so much time tweaking the keyboard, but the forums mentioned above alleviate this somewhat. 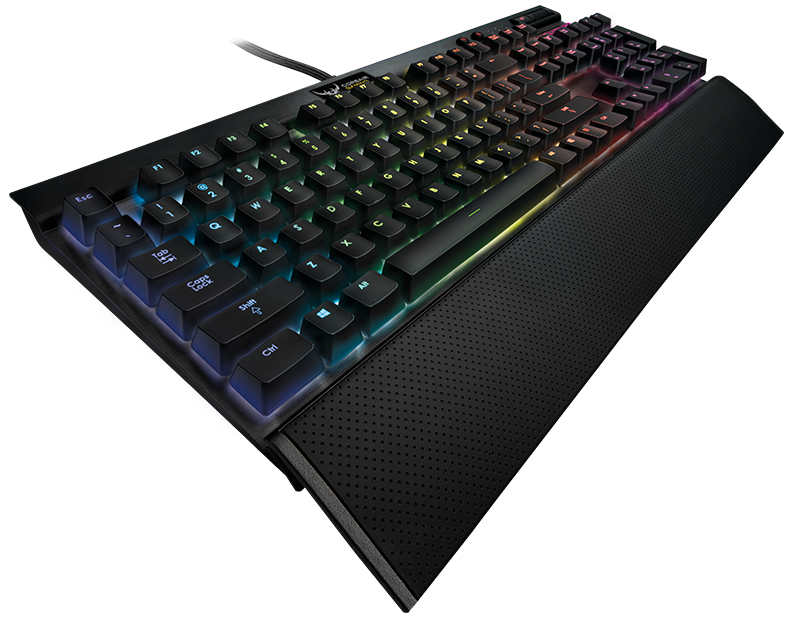 The Corsair Gaming K70 RGB keyboard is one of the best gaming keyboards currently on the market.

The Corsair Gaming K70 RGB mechanical keyboard offers a stylish unit for those who want to stand out. The price seems a bit much at first glance, but it is actually quite competitive, as Razer’s Chroma keyboard is priced at $169 and the upcoming Logitech G910 Orion Spark RGB keyboard will be priced at $179.