The Legend of Zelda series is a franchise that has contributed quite a lot to the video games industry, being almost like a “founding father” of action-adventure games. In its 28 year history, many foundations and techniques have been taken straight from the iconic series and without various games like A Link to the Past, or Ocarina of Time, who knows where action games would be today. Hyrule Warriors, Nintendo’s collaboration with Koei Tecmo and Team Ninja, is practically a celebration of the storied franchise. 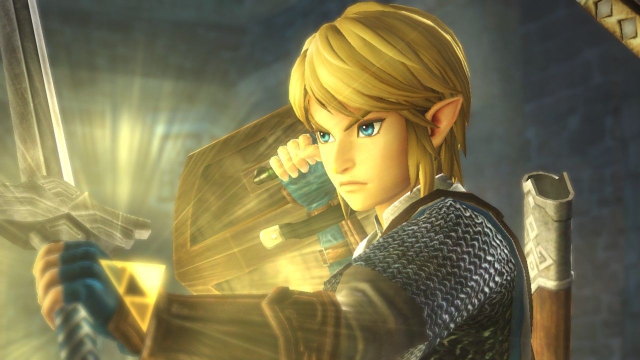 Now something like this seems like a bit of a risk, as the Dynasty Warriors series is considered by many to be a repetitive action game with little variety, but much like the various crossovers in the past like One Piece: Pirate Warriors, or even Dynasty Warriors: Gundam, it takes fan favorite characters of The Legend of Zelda series and makes many of them playable for the first time. Unlike the other crossover games however, this game is given added variety thanks to the supervision of The Legend of Zelda’s series producer Eiji Aonuma.

Adding in various items from the series like bombs or boomerangs, a targeting system, or even a weak point system that feels similar to the stamina system in Skyward Sword, it gives players various new ways to experience a Warriors style game. It also utilizes items similar to how The Legend of Zelda series does, as  you would typically get a new item when it is needed for the stage at hand. Whether that means using it against a new boss monster, or even to clear a path to get to another area of the map, it helps add just enough to the game to make it feel somewhat fresh.

Visually the game looks pretty good, maintaining the sort of visual style that we’re used to for the franchise, while giving it a nice HD sheen. The characters seem very bright and colorful, almost like they glow with a magical essence that makes this game easy to associate with other fantasy worlds. Dozens of enemies are displayed on screen at once and the game runs pretty smoothly when playing through the game alone (more on that later).

The overall presentation is pretty slick, with easy to navigate menus, a narrated plot between missions, and minimal voice acting for the various characters (usually amounting to shouts, laughs or grunts like we’re used to from the series). Fantastic character designs are also utilized to make these fan favorite characters look fantastic in a new setting. Link’s scarf is definitely growing on me as a great addition to his attire, and I rather like the Volvagia (Ocarina of Time boss of the Fire Temple) inspired armor for the Dragon Knight Volga. 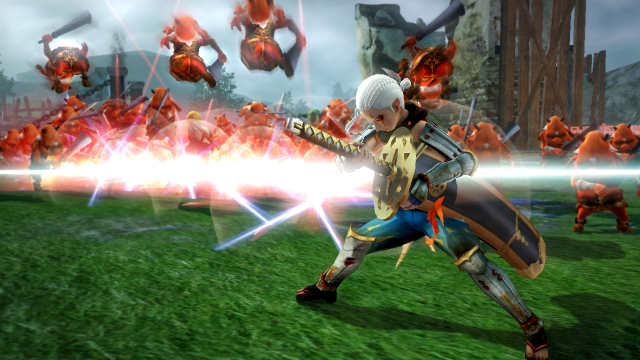 The game’s story mode, or “Legend Mode”, is simple enough to follow. The Sorceress Cia releases monsters all across Hyrule, trying to free the fragments of the Demon King’s soul from across time and space. It’s up to Link as a newly appointed knight of the Hyrulean army to take up the mantle of the hero and try and save the day. Unlike the typical games from The Legend of Zelda, this time, he is far from alone. Having a chance to team up with and play as various other characters like Impa, Sheik, or Fi, it gives a lot of options to change up the game and the overall replay value of the game. It does a good job with bringing these characters together, and even has a few twists and turns here and there, albeit a basic story altogether.

As a nice addition, all of the game can be played with a friend through off-TV play co-op, as one player will have the gamepad and the other will use the TV using either a Pro controller or the Wii Remote with a Nunchuk. The experience does diminish a little bit as playing co-op does drop the resolution and frame rate of the game, but the overall experience is still very enjoyable with a friend. Even though the story may require you to select a specific character, your co-op partner has their choice of any character in the game, so you can have interesting team-ups that wouldn’t exactly be canon.

As you progress through the game, you’ll gain experience to level up, heart pieces and containers to expand your health meter, new weapons to change up your game, and even materials for crafting various things like badges or potions. Badges are used to increase your combos and also improve things like defense, or make you gain your super attack faster. It’s a surprisingly detailed system that makes plenty of references to other games of the series, and it would definitely take a long time to upgrade a character, let alone every character.

Weapons and characters all feel pretty unique from each other, and even though the combos may be similar for the most part, various things like timing or even special features, like Zelda’s light orbs or Midna’s darkness buff, can make the characters each feel rather unique.  The action is all brilliantly performed as characters practically dance across the screen (in Fi’s case, quite literally) with style and visually striking effects. It’s easy to find favorites, whether it be a character or weapon. I found myself really enjoying Impa equipped with her Naginata weapon, as it attacks with beautiful animation and fiery effects, not to mention one bad-ass super attack. 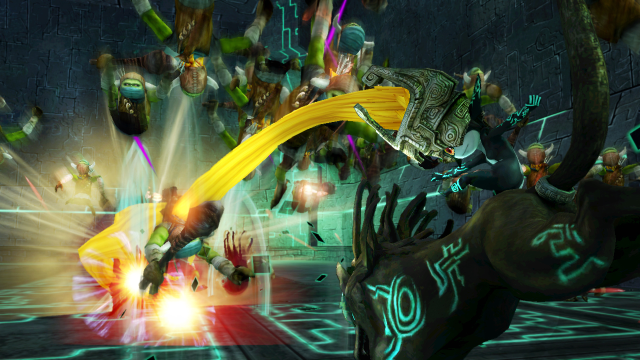 Outside of the Legend Mode, we have another interesting mode based on the original Legend of Zelda game, the Adventure Mode. I found myself growing quite addicted to this, as it hosts somewhat shorter but sweeter challenges that gives players a lot to do after completing the story. Challenges could be anything like defeating a number of enemies with devastating attacks that could easily take you out in one hit, or even simply answering quiz questions by defeating the correct enemy. Completing these challenges could earn rewards like weapons, characters, or collectibles like heart pieces or Gold Skulltulas.

You may also earn search items, special items used on the Adventure Mode map to uncover hidden secrets. Again, this mode can be played entirely in co-op, and even has some Online capabilities in the form of “Network Links”, where you would meet other players on the map and assist them with their challenge.  It may not be a full online mode, but it still has enough to get involved with other players.  Nintendo has expressed interest in a long term plan with this title, as a season pass and some free DLC will be available for the game later on, which is great to see that they plan on supporting the title with new content to keep players coming back.

One specific quality of note is the game’s music. Taking various songs from the franchise and giving them a rock remix is a match made in heaven, as almost all the music sounds great. Most songs even have various forms that change progressively during the missions, or even in the game’s music gallery where hitting the L or R buttons would make them instantly turn to a different version mid-song. The Legend of Zelda theme has never pumped me up this much and it goes well with various parts of the missions.

Now even though the music is a high point of the game, I will say that the audio department does have one little thing that could easily be considered the most repetitive and irritating part of the game. There is a jingle that fans of the series will be familiar with, and in this game, it plays EVERY time you pick up a material or weapon. Now on average, you’ll probably pick up a half-dozen of them or more per mission, and I’ve had it play almost in rapid fire succession. It’s a nice jingle, but hearing this much makes me just want to turn it off, and as far as I know, that option is not available. Unfortunate, but not enough to diminish my enjoyment with the game overall.

It’s by no means a perfect game, and it’s easy to consider it as “mindless fun,” but Hyrule Warriors is a solid title that gives a strong addition to the Wii U’s library of exclusives, and easily stands among the best of the Warriors franchise.