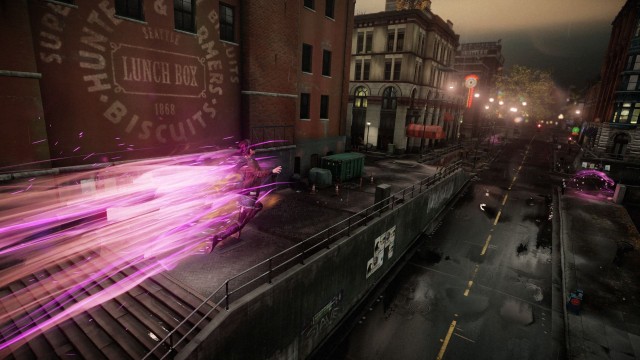 I really enjoyed inFAMOUS: Second Son, in my opinion it has a much better pace and a cooler variety of powers than the previous games.  It was a standout title in the franchise and it helped make a great exclusive for Sony’s newest console.  I enjoyed it so much I got the Platinum trophy fairly quickly, and I was still left hungry for more.  Enter the standalone DLC story inFAMOUS: First Light, a story focused on one of the game’s supporting characters, Abigail Walker, AKA Fetch. This story plays out before inFAMOUS: Second Son’s story begins, giving us a plot that happens just a bit before the main game, and one that explores Fetch’s back story, taking place two years before those events.  What players will experience is a beautiful and even somewhat emotional story that will really make this title shine.  For those that haven’t played inFamous: Second Son, minor spoilers below. 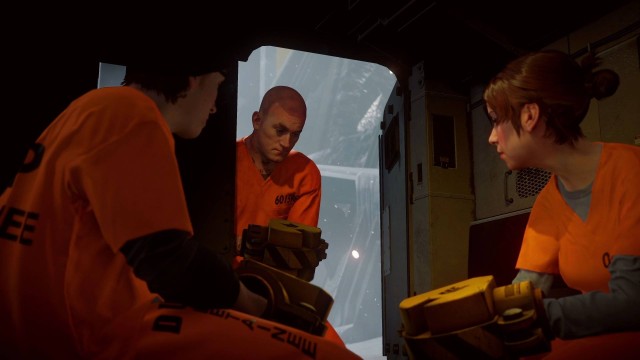 Fetch has the “neon” power that allows her to shoot lasers, blast stasis fields, and also run with incredible speed across the city of Seattle, all powered by neon-lit signs. Since it is her own power, she has a few more tricks than Delsin gets in inFAMOUS: Second Son.  And since the game is entirely focused on her power, it gives the developers some freedom to make changes to the game to improve the use of the power.  Some of these improvements include little boost patches all across the city, allowing you to run through them and gain a temporary boost of speed, or even jump higher and launch yourself further, making traveling a breeze.  Since this is a smaller title, it takes place in a smaller portion of the city, basically cutting the map from Second Son in half and having just a few new environments to explore.  Despite that, it’s still a large enough area to run around and complete challenges.  Other little improvements include nice upgrades that significantly change the way you play, as Fetch has the ability to take over turrets and even “enslave” the minds of her enemies to make them fight for her.  It’s nice to explore the depth of what is arguably one of the coolest powers in the franchise. 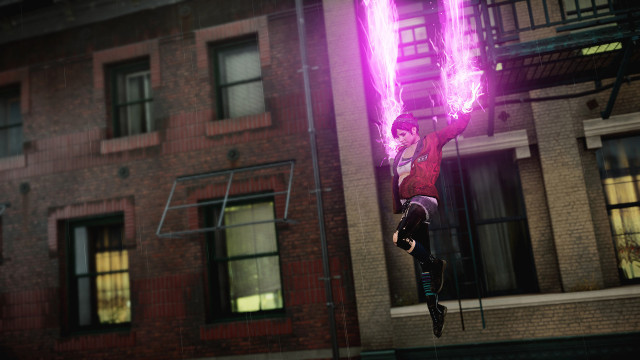 Speaking of challenges, this title brings forward an expansive set of challenges, completing each earning skill points that could help you improve your powers.  These challenges range from getting 20 consecutive melee kills, to stopping 10 drive-by shooters. It definitely adds to the length of the game, which unfortunately, it needs, as First Light is only a few hours long. The main story can be completed in about four to five hours, even with some of the optional side missions done. Even though it’s a smaller game, there is still other content to keep things fun and entertaining. The tagging from Second Son has returned with “Neon Graffiti”, allowing you to use the accelerometer of the DualShock 4 to control Fetch’s hand and making beautiful neon artwork.  You’ll also have hostages to free, drones to destroy, and even “Lumen” races to complete, which are surprisingly fun little distractions. 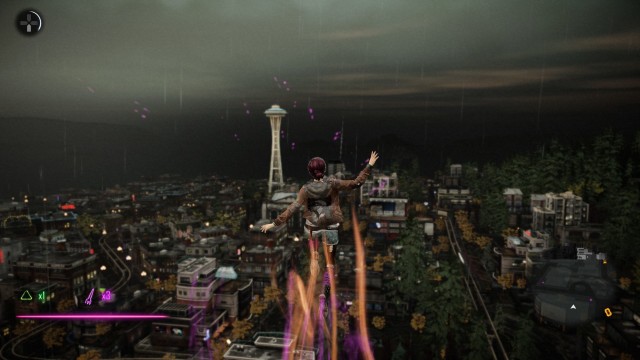 Also new are the D.U.P. Battle Arenas, allowing you to place Fetch in various rescue or survival missions that put your skills to the test.  They have a great amount of challenge to them and scores can be uploaded on a leaderboard to encourage replay value. Once players beat the game, they’ll have the opportunity to play in these battle arenas with Second Son hero Delsin as well. These battle arenas have their own set of challenges too, so players that like getting 100% will spend a hefty amount of time in them. Speaking of 100%, this game does also come with it’s own Platinum trophy as well, so fans of trophy collecting may be interested in a smaller title with a nice set of trophies. 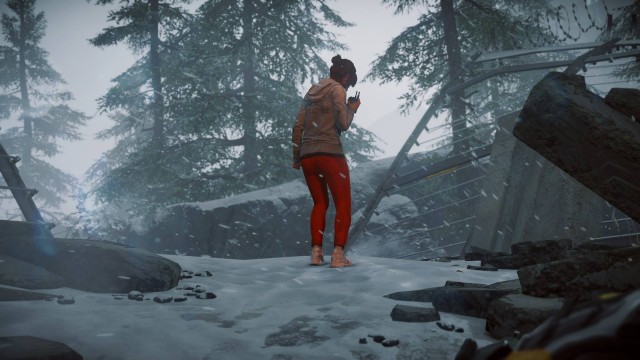 As for the story of the game, despite it’s length, the characters are very well developed. We get to see how close Fetch was with her brother, Brent, and we also get to see new characters that help flesh out her story. You’ll also see a bit of Second Son’s antagonist Augustine as she tests your abilities and questions your past. It’s a nice little story that really comes together in the end, with it’s own resolution and a nice lead into the plot of Second Son. Even though I actually liked Delsin, inFAMOUS: First Light really shows how strong of a character Fetch really is, and makes her a stand out for female protagonists in games in general. I have to say I really enjoyed myself playing this game, and I really hope Sucker Punch’s next title can live up to the expectations I have after inFAMOUS: Second Son and inFAMOUS: First Light.