The Last of Us Remastered Improvements Revealed. Additional DLC Planned for 2014 Naughty Dog has revealed during a presentation what improvements the Remastered version of The Last of Us has compared to the PS3 version.

Acording to photos from the presentation, posted by MeriStation journalist Javi Andres on his twitter feed, The Last of Us Remastered has the following graphical improvements:

But that is not all. Along with these graphical improvements come some other new features:

A slide from the presentation confirms exactly what additional content is included on the game disc:

It also confirms that all DLC from the PS3 version is cross-buy, meaning that those who have already bought it will be able to access it on their PS4 for free. There is also some new DLC, most likely multiplayer focused, set to be released this year. 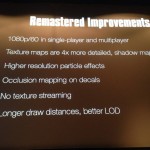 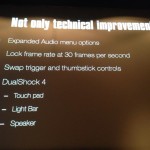 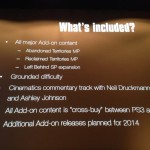