New details about Bloodborne revealed in the latest issue of Famitsu The latest issue of Famitsu magazine has brought some great news for the fans of the upcoming PlayStation 4 exclusive title Bloodborne. The magazine reveals information about the backstory and the setting of the game and some new screenshots.
You’ll find the full translated version of the article below, thanks to DualShockers:

The game is set in the 19th century under the reign of Victoria. The “Ancient City of Yharnam” is positioned on the border of a huge valley.
Although the townspeople have grown to be prejudiced due the natives beliefs of the gloomy town, there are an ancient and unique ways of medical learning in the city.
Everyone knows of the dreadful endemic disease known as “The Beasts Disease” and also of a certain cursed area.
Every night in Yharnam an event known as the “Beast Hunt” happens, where the town’s streets are full of the smell of Beasts, blood and most of all death.
The mob of “Hunters” who wander the city begin to look and act strangely all of a sudden and go into an uncontrolled frenzy. The frenzied men then grip onto their weapons whilst the light of the Torches can be seen in their murky melted pupils.

“Hunters” hold a Torch in one hand and a weapon in the other. The beasts are great in strength and fast on foot. It is best to watch the beasts movements and think of the best strategy of how to take them on.
There are those that burn the bodies of huge beasts. A cruel feast unfolds under the beautiful moon, but what do these people have in common with the beasts? That answer is unknown at this very time.
Many bizarre secrets are hidden within the dark depths of the Ancient City of Yharnam. The “Hunters” who hunt the beasts all have very unique and special weapons to chase down the beasts.

There are people who hunt down the beasts for a living, and they are called “Hunters.” Their equipment includes a unique weapon that has the shape of a Saw mixed with a hatchet as well as a Shotgun to take down the Beasts.
Armor is obsolete and so Hunters use a different battle technique to fight their battles. The shotgun is used for far away encounters whilst their unique weapon is used for up close battles. This is how the Hunters fight. When the time comes to overcome dangerous situation, they must persevere to stay alive in many life and death struggles.

A despair filled battle of life and death begins against grotesque enemies.

Terrifying-looking enemies will suddenly attack the Hunters. Giant enemies as far as the eyes can see with extremely sharp claws.
Giant enemies will be speedier than you ever thought they would be, and you will need to be alert in order to take them on.
From here on out, bet your life as your ghastly battle for your life will begin… 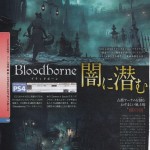 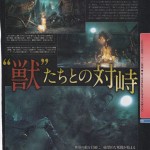