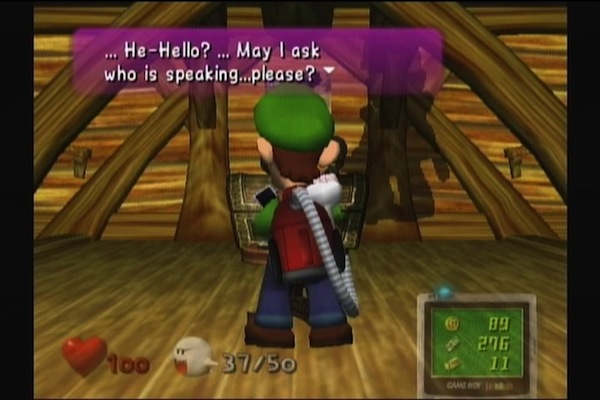 Welcome to another session of Gamebusters, where we track down popular video game myths and attempt to debunk them. Last week we examined the rumored shadow people of Hell Valley in Super Mario Galaxy 2, and this week we’ve decided to let the green brother shine in his own myth.

The myth in question is that Luigi has committed suicide in his Gamecube game, Luigi’s Mansion. This myth started out when gamers noticed something rather creepy in the attic of the mansion. When lightning has flashed and Luigi is on the phone, it appears that his shadow is on the wall, completely off the ground, with what appears to be a noose around his neck and his hands by his sides. The user Aska49 has posted a video showing off this scene.

This has caused a number of theories to pop up on message boards. Some believe it is just a glitch in the game. Others believe that Nintendo purposefully put the shadow there in order to freak out gamers (the entire Luigi’s Mansion premise isn’t exactly something we’re used to in a game taking place in the Mario universe, after all), since the game utilizes dynamic shadows. A few have even expressed the idea that Luigi has been dead the entire game and the mansion is his purgatory.

Myth or fact? While we can indeed see such a shadow in the game (view image at the top of this article to see for yourself), it is hard to make out everything. For instance, the arm on his right seems rather small. Admittedly, if his hand is straight, it would, but it looks more like the “hand” in the shadow is actually the hose of the vacuum (although admittedly it seems to be a bit farther from his body than it is on the model). If you look at the left part of the shadow, slightly above the support pillar, you will even see what appears to be the phone that Luigi is speaking into at the time. Personally, I also don’t see the noose that is reported to be hanging around Luigi’s throat in the shadow on this scene.

As we dug through the reports of the myth, we came across an idea of what, exactly it may be, as posted by the same user above, Aska49.

His theory makes a great deal of sense to us, particularly since we just aren’t seeing everything in the shadow pictured above that people claim. Yes, what we think is the hose could indeed be his arm, with his hand perfectly straight so the shadow of it appears smaller than it otherwise would, but since it seems to be in a similar (if not the exact same) pose as Luigi currently is, just off the ground, we have to believe it is a glitch in the game. As a result, Aska49’s recreation makes a great deal of sense, so we classify this particular myth as simply that.

I hope you’ve enjoyed this week’s Gamebusters. As always, we appreciate any suggestions for the next myth to tackle, so if there are any you want to see in this segment just let us know in the comments. Happy gaming!