Those who love the Cartoon Network smash hit Adventure Time are in for a totally mathematical treat on November 12 when D3Publisher releases the new title based on the show, Adventure Time: Explore the Dungeon Because I DON’T KNOW! The title promises a heavy launch, going out to almost all major current consoles, including the Wii U, PlayStation 3, Xbox 360, Nintendo 3DS, and Windows.

The 3DS version, however, will have a little extra something the other games do not have, or at least won’t have in the same capacity: Finn & Jake’s friend BMO.

BMO (pronounced “Beemo”) is the genderless companion to Jake the Dog and Finn the Human, designed for household assistance and entertainment, and looks like a mash-up between a Game Boy and a old Macintosh computer. (Wonder if it can run Uninvited?) In the 3DS version of the game, BMO will be an interactive character on the console’s bottom half touchscreen, providing hints, commentary, and general wackiness designed for fans of the show.

Check out the screenshots released today, which showcases Cinnamon Bun, Ice King, and the Lumpy Space Princess as three of the available playable characters. 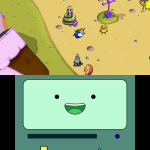 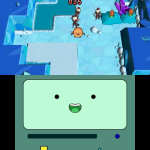 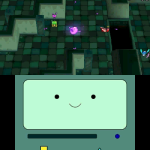