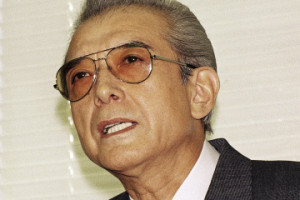 FILE – In this Friday, June 12, 1992 file photo, Hiroshi Yamauchi, then-president of Japan’s Nintendo Co., answers questions during a news conference after he won the final approval to buy the Seattle Mariners at the company’s head office in Kyoto, western Japan. Yamauchi, who ran Nintendo for more than 50 years and led the company’s transition from traditional playing-card maker to video game giant, has died of pneumonia, Thursday, Sept. 18, 2013. He was 85. (AP Photo/Katsumi Kasahara, File)