Need For Speed Most Wanted (Wii U) Review You don’t always have to reinvent the wheel to make a great game.  Sometimes, you just have to give players a car, and let them drive really fast. Need For Speed Most Wanted is a simple experience that doesn’t do anything terribly original, but it is polished and, more importantly, fun.

When you start Need For Speed Most Wanted, you’re plopped into a lovely but generic large city.  Apparently, this city has become something of a haven for street racers.  The kings of the city are the Most Wanted, a group of the ten best street racers.  You place a young racer who wants to join the Most Wanted because uhhh… well, because they’re cool and presumably get all the chicks.  To climb the ranks of the Most Wanted, you have to challenge each Most Wanted racer to a race, beat them, and take their car.  Most Wanted is very light on story which is perfectly fine.  This is a simple pick up and play title, and it probably wouldn’t benefit from extraneous story.

Before you can challenge the Most Wanted racers, you need to earn enough speed points to be worthy.  You can earn speed points in two ways.  First of all, you can drive around the large open world of Most Wanted earning points for streaking by speed check points, crashing into billboards, running from the cops, and generally driving like a jackass. 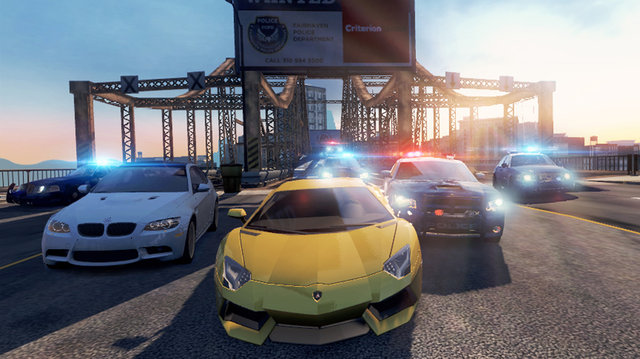 The open world component of the game is fun for a brief period of time, but soon becomes quite boring.  There simply aren’t very many interesting things to do in the city.  After you get over the thrill of speeding through the city streets like Vin Diesel, you probably won’t spend much time roaming around.  Aside from the potential to find new drivable cars lying around, there isn’t much motivation for exploration.

The bulk of the gameplay takes place in a series of missions which can be found scattered throughout the map, or can be accessed by a menu.  There are a set of races and missions for each car, each of which each have their own objectives.  Sometimes, you’ll have a simple race, and other times, you’ll engage in a race while cops are trying to take you down.  Other times you may be asked to travel through a set course while maintaining a certain average speed.  Winning races earns you speed points and new parts that can be used to modify each car.

Most Wanted strikes a good balance between realistic and arcade style gameplay.  Calling NFS: Most Wanted realistic would be a stretch.  Cars will generally pinball off anything they hit, unless it’s a head on collision.  At the same time, the cars have a nice weight to them, and controls aren’t as loose or wild as games as series as Burnout. Most wanted certainly leans towards arcadey action, but it’s restrained enough that it isn’t silly. Players can select from a large selection of cars, about 40 I believe, which feature models from just about any major car manufacturer.  I’m not a car guy myself, so I can’t say how realistic the cars are, but they all look shiny and detailed.  In general, Need for Speed is a fantastic looking game.  Textures are crisp, car models are lovely, and the game moves smoothly with no noticeable slowdown.  Many people were interested in how the Wii U version compares to its counterparts.  Honestly, it’s hard to tell the difference between Wii U and X-Box 360 versions of the game.  When the game is still, you’ll notice higher resolution textures on the Wii U version, but when you’re whizzing by the scenery, only the sharpest eyed gamers will be able to notice a difference.

The Wii U version does sport a few worthwhile additions.  Co-driver mode allows a second player with a Gamepad to change cars on the fly, eliminate traffic, and disrupt cops.  Most gamers won’t wind up using this feature, but it’s great for those people with a child in the house who may not be old enough to play the game, but will have a lot of fun as a “helper”.  More useful than co-driver mode is off screen play.  Because you need to accumulate speed points to progress through the game, there is a bit of grinding to be done in Most Wanted.  Being able to casually rack up speed points while watching some TV was a feature that I found very appealing.

Most Wanted makes good use of online functionality.  In addition to a fairly standard online mode, where gamers compete in a series of seemingly random challenges for speed points, you’re constantly kept aware of what your friends are up to.  If a friend completes a mission, his time will be posted for you to overcome.  When you pass by a speed camera, the game will let you know if someone on your friends list has gone by faster.  It’s a nice touch that adds a touch of community to the game even if you’re not in the online multiplayer mode. I’m not going to pad this review out, because it’s really simple to determine if you should buy NFS: Most Wanted.  Ask yourself one simple question. Do you like driving really fast in a consequence free environment?  If so, then there is no reason to not buy Need For Speed: Most Wanted.  It is (obviously) the best racer on the Wii U right now, but it’s also a fine racer in general.  The game doesn’t do much to innovate the genre, but it’s fast and it’s fun, and in the end, isn’t that what it’s all about?