The mobile gaming market is rapidly expanding. I mean, from what I hear at least. Considering my cell phone is technologically only a few steps higher than two soup cans and string, I don’t play a lot of them, as it would sap my battery faster than an 18-year-old mallrat from Encino, ohmigod fershure.

Normally, a title like this, had it stayed on iOS and Android, would have passed me by without a second thought. Instead, sneaking like a ninja through fake Easter grass, Kung Fu Rabbit slipped its way into the Wii U eShop. What can I say, I’m a sucker for adorable animals that fight.

Kung Fu Rabbit is an odd little mash-up between a physics puzzler and a platformer. Not so much a physics puzzler like Angry Birds, where you figure out your trajectory and let the birds fly, but not so much a platformer like Super Mario anything. Somewhere in the middle. There’s no dialogue in the game, just some comics to kind of explain the plot, which goes something like this:

Kung Fu Rabbit (I guess that’s his name) is an adorable rabbit that knows kung fu. He is also the leader of a village of adorable bunnies, who for some reason, get kidnapped by a malleable race of aliens, who trap the bunnies in bubbles they form out of themselves. The rest of them turn into this weird tar-like substance that Kung Fu Rabbit cannot touch even in the slightest or he insta-dies. You, as Kung Fu Rabbit, must save those adorable bunnies!

I keep referencing the artwork because it is pretty awesome. The backgrounds remind me of a Samurai Jack feel, if Samurai Jack was done only with adorable bunnies. The rest, while not bad by any means, is pretty forgettable. The game consists of three worlds and a “Bonus Cavern,” each split up into twenty areas a la Angry Birds. As Kung Fu Rabbit, your job is to traverse these areas, sneak up on the alien baddies and eliminate them, and jump over wide pits and climb sheer walls to avoid the deadly goo the aliens have released. Kung Fu Rabbit can collect carrots along the way which can be used in the Dojo to buy power-ups, such as extra speed, claws to climb walls better, or freeze disintegrating blocks for a little more stability before they crumble.

It’s not a bad game. Don’t get me wrong. It’s just pretty darn average. I know mobile games are supposed to just be minor time wasters as opposed to the immersive experiences console and PC gaming bring to the table; at the same time, five minutes was about the maximum Kung Fu Rabbit held my attention. For those five minutes, though, it wasn’t bad. The levels were challenging, and some were frustrating to the point where I refused to quit until I completed the level. The problem was, once I was done with that level, I was satisfied, but I didn’t feel compelled to attack the next level. I was content to turn off the game and move on, unlike Angry Birds or Candy Crush Saga where after tackling a difficult level I feel like a gladiator and taunt the game to bring me its next challenge.

I totally support indie developers, and I’m all for new downloadables, especially on Nintendo’s eShops, but Kung Fu Rabbit, while adorable and occasionally challenging, doesn’t hook you in. It may work for the average person, whose game attention span is about 10 minutes or less, but for gamers, it needs more. 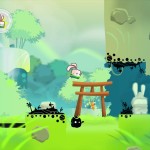 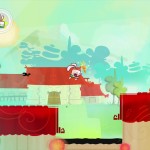 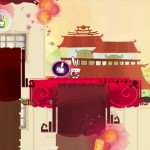 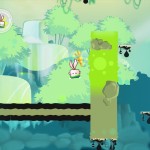 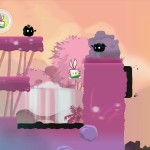 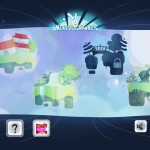