Pre-order my game NOW! – By DEADPOOL and NOT RYAN BATES Seriously. F**k this Bates guy. What kind of derp leaves their computer logged on? He had some BS on here, but it sucked, so here’s a little something I wrote up for my adoring fans.

(Hey, and if that Aranda douche is out there, don’t f**k with this. Cuz I’ll come after you, and I’ve got sweet guns and swords and, like, rocket launchers, and other scary sh*t.)

Now where was I? Oh yes. My announcement.

April 17, 2013 – So I, the great and magMANimous Deadpool, cordially intimidated invited Activision Publishing, Inc. and High Moon Studios to make a video game starring Marvel’s most Marvel-ous character, me.  And you being a gamer of unquestionable good taste wish to pre-order that game. Well I say bravo – you deserve some awesome rewards for putting your trust in Deadpool.

So here we go… Because Deadpool loves you, I’ve sent threats hugs and kisses to the heads of some major retailers to get you some sweet merch for pre-ordering the Merc, including: -> MY “Merc with a Map Pack” DLC (confetti explosion!) adds two new maps – GRT Plaza and Inside the Tower – to Deadpool Challenge mode, as well as two b-b-b-b-bonus costumes – the D-Pooly and Uncanny X-Force suits only for use in the unlockable Infinite mode where your stats are tracked on a global leaderboard.

-> Exclusive digital wallpaper for my PowerUp Rewards friends featuring who else – me!!! I’ll probably be, like, you know, totally ripped in it and all. No bigsies. – U.S. Only

-> A (drum roll, please) midnight launch party at the GameStop with the most pre-orders (more drums!) paid BY Activision (now the bassoon!) with a LIVE appearance from ME, Das Pool! Now’s your chance, Kodiak, Alaska GameStop customers! – U.S. Only -> An exclusive digital wallpaper and digital cover sleeve, because what are you doing not staring at my perfectly sculpted body every waking moment of the day?

That’s it. Go pre-order my new game now, or else.

Deadpool (that’s what it’s called, cuz it’s MY game) will be available June 25, 2013 for the Xbox 360®, PlayStation®3 with a $49.99 SRP, and PC with a $39.99 SRP. It is rated “M” for Mature by the ESRB (pansies). For more information, I hired some goons to build me some social media thingers, so visit www.deadpoolgame.com, or follow along at www.facebook.com/RealDeadpool or on Twitter @RealDeadpool. 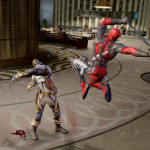 WOAH! Nice picture! This is like some Matrix sh*t right here. 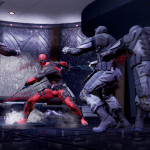 He slices, he dices, he… he looks damn sexy– oh wait, that’s me. I DO look damn sexy! 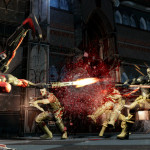 Check that out! Not even two hands, just one! BANG BANG! 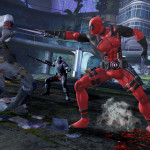 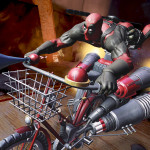