Ubisoft has today, as promised, released some new information on the recently announced Assassin’s Creed IV: Black Flag, which is currently in development from Ubisoft Montreal (with assistance from studios in Annecy, Bucharest, Kiev, Quebec, Singapore and Sofia) for the Wii U, Xbox 360, PS3 and PS4.

For those who pick up the game on the PS3 or PS4, Ubisoft is dishing out an additional 60 minutes of content via the PlayStation Network after launch.

The game will feature the new lead character Edward Kenway, a British man who falls from privateering for the Royal Navy to piracy, during a time when war between the major Empires is coming to an end.

As Ubisoft puts it: “Edward is a fierce pirate and seasoned fighter who soon finds himself embroiled in the ancient war between Assassins and Templars. Set at the dawn of the 18th Century, the game features some of the most infamous pirates in history, such as Blackbeard and Charles Vane, and takes players on a journey throughout the West Indies during a turbulent and violent period of time later to become known as the Golden Age of Pirates.”

AC IV will feature over 50 navigational locations and let players make use of weapons of the Assassin’s Order, as well as weapons of the era.  Multiplayer will also return, though details on that are not available at this time.

Ubisoft will release the PS3, Xbox 360 and Wii U versions of the game on October 29.  Now enjoy some screenshots below! 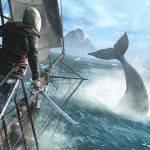 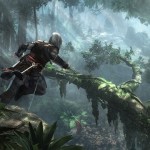 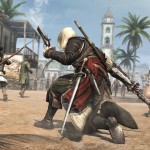 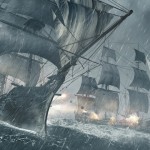