Why So Serious? How Final Fantasy’s Graphics Are Killing The Franchise

One of the most frequently demanded projects in gaming is an HD rerelease of Final Fantasy 7.  What could be better than one of the best games ever made re-released in glorious HD?  Despite its age, it’s hard to look at the tech demo for FF7 on PS3 without drooling a little bit.  Yet, every time I hear a fan asking for an HD release of Final Fantasy 7, I cringe.  People recognize that Final Fantasy has been slipping in quality, and they’ve been speculating as to why that is.  Some blame the writing, some blame the character designs, and some blame the Japanese game industry in general.  Personally, I place the lion’s share of the blame on the ever improving graphics of the series.  As time has gone on, the Final Fantasy franchise has gotten prettier and prettier but worse and worse.

*Wild spoilers are lurking in this article for the FF series.  You’ve been warned.

What Made Final Fantasy 7 Great? Final Fantasy 7 was a game that came out at the perfect time.  The CD storage medium allowed for an audiovisual experience that had never been seen before.  CGI cutscenes were awe inspiring and gave key moments in the story an emotional heft that simply wasn’t possible with the charming but technically unimpressive sprites that the FF series was known for.  It’s hard to forget seeing the Weapons emerging from their slumber, and Aeris’ death is a moment that is burned into the memories of a generation of gamers.  Along with CD quality music and wonderfully detailed pre-rendered backgrounds graphics are a huge part of what made Final Fantasy 7 great.

While the graphics and cuts cenes are what fans remember most fondly, they’re not the only reason that Final Fantasy 7 was so beloved.  Final Fantasy 7 also featured many of the hallmarks of the Final Fantasy franchise.  While characters looked gorgeous in cutscenes, they maintained their super deformed heritage outside of those scenes.  More importantly, the game maintained the critical balance between comedy and drama.  Final Fantasy wasn’t all about Cetrakebabs and Cloud moping, it was also a story with wit, charm, and fun.

Final Fantasy 6 told a grand story with high stakes.  There are some incredibly serious moments, and some very dark themes running through the game.  At the same time, there were much needed bursts of levity and whimsy.  One of the most memorable scenes in Final Fantasy 6 (or Final Fantasy in general) is the opera scene.  In this scene, players control Celes as she attempts to stand in for an opera star.  This scene offers a perfect blend of top notch production values and humor.  An incredible score and excellent visual design work to set up for a dramatic moment, while the ability to flub the plays lines and the presence of an Ultros, a FF villain who looks like he’s fresh out of an Adult Swim cartoon, adds a nice bit of humor to the proceedings.  To me, this scene represents Final Fantasy at its very best.  It’s the moment where Final Fantasy’s manic energy and grand scope achieve perfect harmony.

Final Fantasy 7 helped keep the humor alive.  FFVII is packed with some of the funniest, most offbeat moments in gaming.  Whether it’s dressing Cloud up like a girl in an attempt to seduce a pimp (yeah that happened), competing in a squat thrust competition in a gay gym, Red XIII’s awful disguise, the Golden Saucer’s play, The Turks in general, or the slapfight between Scarlet and Tifa, Final Fantasy VII has a lot of moments that serve to break up the constant tension of a world about to be destroyed.

Those scenes also helped to round out characters, and show you what they’re like when they’re not toppling oppressive regimes.  Taking Aeris or Tifa (or Barett) on a date shows you another side of that character.  These scenes show you what our heroes are like when they’re not out to save the world from giant meteors.  Those moments help the characters feel like real people in a way that grand speeches about fate can’t do. After Final Fantasy 7, things began to go in a different route.  Final Fantasy 8 ditched the classic super deformed characters to create characters that looked real, or as real as the Playstation would allow.  With realistic looking characters, there were some limits and what could and couldn’t be done.  With a more realistic aesthetic, gamers naturally expect more realism.  Final Fantasy 8 featured some humorous moments (although many were unintentional).  Headmaster Cid in general was worth a few chuckles, as is the concert your cast puts on, Brothers GF, Laguna’s energy, and Rinoa’s pitiful resistance.  On the whole though, there was a lot less fun and humor than there was in FF7.  With the possible exception of Final Fantasy IX (I haven’t played that one yet) the Final Fantasy games have gotten consistently less light-hearted as time has gone on.

Final Fantasy XIII is an incredibly long game, and it’s also a pretty grave game.  We have children turning to crystal, mothers getting mowed down in front of their kids, a tyrannical government sending its citizens to die, general hopelessness, and pretty much every character is seeking vengeance for something.  I actually liked a lot of the elements of Final Fantasy XIII’s story, but boy is it glum.  Sazh and Vanille attempt to offer some kind of comic relief, but they come off as more annoying than amusing.  Aside from a brief, out of place, and boring trip to Chocobo-land, there is nothing humorous or lighthearted to speak of.

A game like Final Fantasy XIII desperately needs some levity.  The game clocks in above the 40 hour mark for the average player trying to see the story to its end.  Forty hours of incessant angst and gloom is simply too much to ask of an audience.  By the time I got to the second trip to Pulse, I was worn out.  Final Fantasy XIII wasn’t much longer than FF7 or 6, but the lack of any sort of comic relief or diversion from the main plot made the game feel far longer than it was.   It was just too much.  Yes, an emotionally strong story is important, and yes this pretty much requires a healthy dose of gloom, fear, and a sense of danger, but it also requires something else.

Final Fantasy Has Lost Its Smile

To get away with such heavy material for such a long time, you need something to counterbalance it.  You can’t expect gamers to plow through such a charged story for so long without a chance to catch their breath.  That’s why you need the Golden Saucer, you need cross dressing Cloud, you need dogs in sailor outfits, you need to creep into your crush’s room, you need weird Mog arcade games, you need gay fitness clubs, you need snowboarding, you need slapfights, you need awkward marching, and sometimes you need the female members of your party to be kidnapped by a fat lecherous pimp.  We need these moments to help gamers relax and unwind.  They may not be the most important or memorable aspect of Final Fantasy 7, but the game simply wouldn’t have been the same without them. When a game barrages you with one big dramatic cutscene moment after another, it’s only a matter of time before you become numb to it.

The problem is that comic relief and realism don’t always go well together, especially the type of comic relief offered by Final Fantasy.  Red XIII sneaking on a boat in an awful costume works in a game with block graphics, but in the HD style of FFXIII it would be hard to suspend our disbelief and accept that Shinra isn’t noticing the dog in a sailor outfit.  It’s fine to have Cloud dress up as a girl and get chosen for sex by a pimp, but in 1080p that moment would reach new levels of weird.  Many gamers had a chuckle about Cid yelling at Shera, but I have a feeling that abuse might not be funny if rendered realistically.  If Square wanted to remake FF6’s Opera scene in HD, they would likely have to strip much of the comedic element of that scene.  The more realistic a game’s graphics are, the more realistic its story has to be, and the less room there is for those fun and offbeat scenes that, to me at least, were a crucial but overlooked part of the Final Fantasy franchise.

Did Square Make The Wrong Choice? 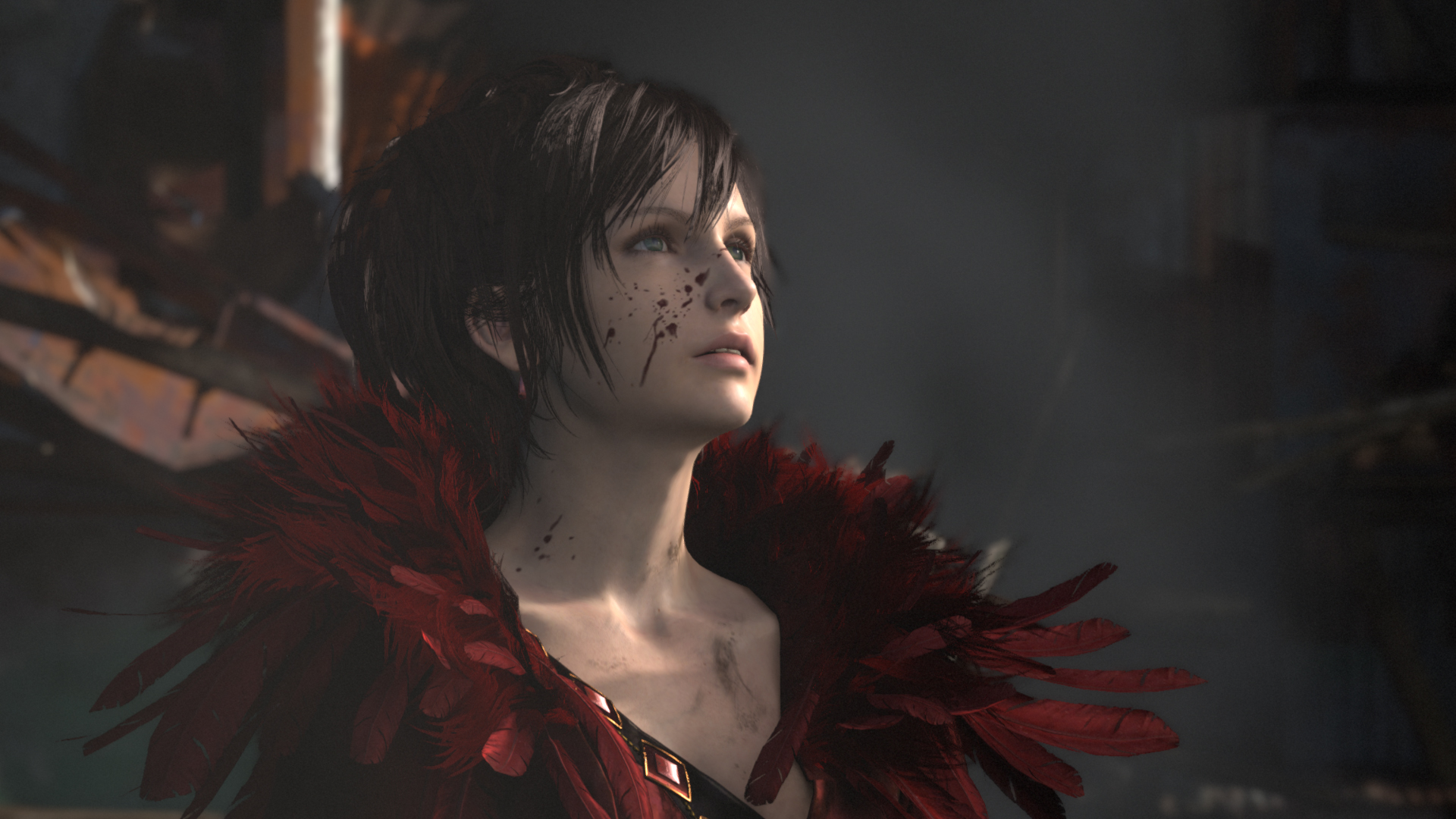 After FF7, Final Fantasy went from a fairly popular series that performed more strongly in the Japanese market to a worldwide phenomena.  It was time for Square to build on that success.  They decided to focus on one of the elements that most impressed gamers with Final Fantasy 7, its incredible graphics and cutscenes.  In the process they lost the more subtle elements that made the Final Fantasy franchise such a fan favorite.  Gone was the mirth, whimsy, and playfulness that helped make a 50 hour adventure palatable.

Square Enix seems intent on building bigger and better graphics engines to run their games.  Square can continue on their current path, and they can likely maintain some level of success for years to come.  However, if Square wants Final Fantasy to reclaim the position that it once held at the zenith of the gaming world, it needs to do more.  The franchise needs to once again craft a compelling, complete, and well rounded experience.  Square needs to do more than create high stakes and dramatic moments.  Square needs to once again create a world that we fall in love with.  Square needs to create a world that we want to save with characters we care about, and adding more pixels and lighting effects won’t accomplish this.