From the largest video game memorabilia collection to the smallest arcade machine ever, gamers can now stand amongst their peers and let their geek flags fly proudly, as Guinness World Records has released the 2013 Gamer’s Edition.

The owner of that memorabilia collection is 31-year-old Brett Martin of Denver, Colorado. The longtime gamer has only been collecting for 12 years, but has amassed a collection of over 8,030 video-game related items. From coffee cups to costumes, lunch boxes to bedspreads and figurines of every shape and size, Martin’s collection cashes out to over $100,000. His secret, he says, was “discovering eBay.”

In related news, I got myself a Weighted Companion Cube from the Portal series while doing Christmas shopping. I’m on your tail, Brett Martin. Watch your back.

Another record-holder raking in the bucks is Arkansas’ Will Johnson, who has earned a spot in Guinness World Records 2013 Gamer’s Edition as the Highest-Earning Call of Duty Player. Dubbed “BigTymer,” the pro gamer has won four different Call of Duty titles on the Major League Gaming Pro Circuit, banking winnings of $135,000. The only drawback, claims the 21-year-old record holder, is that he may have to cut back a little on playtime, “or I risk losing my girlfriend!”

Dude, $135K? There are plenty of gamer chicks out there looking for a man who can handle practice time. Just sayin’.

Another gamer who generated a career is 19-year-old Jann Mardenborough, of Wales, who is recognized as the world’s Youngest GT Academy Winner. The initiative, created by Sony PlayStation in partnership with Nissan, brought together the world’s best race gamers and gave them a shot behind the wheel of a real professional race car. Jann has since earned his international racing license and actually drives for Nissan in the Blancpain Endurance Series in Europe.

I bet that his girlfriend doesn’t complain about his gaming. 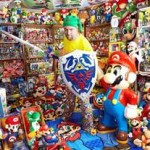 Largest Video Game Memorabilia Collection: Brett Martin has 8,030 items in his collection! That’s not weird at all, right? RIGHT? 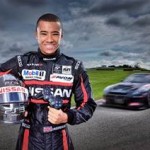 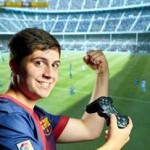 Highest Margin of Victory in a FIFA Game: Jacob Gaby, a 15-year-old in the UK, beat the computer 189-0! I can barely get one out. 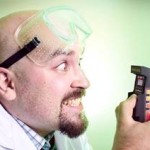 Other records listed in the Guinness World Records 2013 Gamer’s Edition include:

→ Highest Margin of Victory on a FIFA Game: Playing as Barcelona FC, 15-year-old Jacob Gaby of Bushey, United Kingdom, beat the computer’s Fulham FC by a score of 189-0. Take that, Ramon Aranda!

→ Oldest Gaming Record Holder: Wisconsin’s John Bates (no relation) has bowled over 14,000 perfect games on Wii Sports Bowling, which in itself is pretty amazing, but here’s the kicker: John Bates is 85 years old.

The Guinness World Records 2013 Gamer’s Edition hits bookstores today. Now, if you’ll excuse me, I have to work on my attempt at Most Consecutive Race Wins on Mario Kart. I’m currently at 1. So close.