Review | Just Dance 4 – So You Think You Can Dance?

You filled up on turkey and stuffing and mashed potatoes and a little bit of green bean casserole because nobody really likes it but you all make it anyway and yams and cranberry sauce not the fresh stuff the sh*t from the can because you don’t give a rat’s ass that far into the meal prep and beer and wine and more beer and more wine and leftover turkey and leftover stuffing and there wasn’t any leftover mashed potatoes because your Weird Uncle Ed ate the last bit drowning his sorrows from the demolishing the Cowboys were dealt again this year and leftover yams and more wine and beer and a small slice of pumpkin pie because you don’t want to go TOO far off your diet.

Then when you went Black Friday shopping at Stupid O’Clock, you realize you can’t dash as fast as you thought you could in order to get that discount combo Blu-Ray player/toaster/weed-whacker you wanted at half off.

You could join a gym, but during the holidays, who has time for locker rooms and saunas when you have halls to deck with boughs of holly? You could take up jogging, but unless you’re a lucky West Coaster, like myself, it’s colder than a witch’s tit outside. You could cut back on your food intake – who am I kidding, it’s the holidays, no one’s dieting now… except for the un-American Christmas-hating terrorists (so sayeth Fox News).

There is one other solution for how to burn those calories in your own home: Just Dance. Just Dance 4 is out for all the major systems (PS3, XBox 360, and Wii/Wii U), and it’s not here to mess around. The Wii version makes use of the Wii Remotes, and the Wii U version utilizes the Gamepad’s front-facing cameras as well as the Remotes. The other two versions require peripherals, so before you buy, make sure you have either PlayStation Move or Kinect for XBox 360. All versions are mostly similar; this review is based on the XBox with Kinect version.

As with the other iterations of Just Dance, Just Dance 4 provides choreography for over 40 tracks, ranging from classics like Elvis Presley and Stevie Wonder, to ’80s hits from the B-52s and Europe, to today’s hits such as Rihanna and Selena Gomez & The Scene.

Now, I confess, I haven’t played any of the other Just Dance games (bombshell, right?), but when I was assigned this game, I was ready for the challenge. I had a clan of kids ranging from 4 to 14, and a bunch of adults who will do pretty much anything when liquored up. Wanting to get familiar with the game first, I popped it into the XBox and thought I would just have to match some poses up to score points. Those who think that will quickly be turned off by this game. This is Just Dance 4, beezies, and dance you shall. The game judges you based on your mimicking the dancer on screen, and not just how well you match the pictographs at the bottom. Simply trying to match the poses will not be good enough – if the dancer is moving to the left or the right, you should be too, because if you’re not in position at the next score point, you’ll only get an “OK” or “Good” instead of the “Perfect” you’re aiming for. And you’ll miss those Perfects if you’re not in time with the music.

The game, admittedly, is fun. I, along with my two main test victims, female S and male E, laughed very hard and even at times looked downright good dancing along with our on-screen leads. The wide variety of tracks will certainly please everyone, and maybe even introduce players to artists and songs they may not have heard of. While E enjoyed the routine for Rihanna’s “Umbrella” the most, S enjoyed dancing along to “Istanbul (Not Constantinople)” by They Might Be Giants, a group I’m certain she had not heard of until that very moment. Myself, I think you can never go wrong with the “Time Warp,” but the routine for Stevie Wonder’s “Superstitious” was also a ton of fun.

But although the game is fun for everyone, having a sense of rhythm naturally helps. S and E both come from a musically-inclined family, whereas the only musical instrument I know how to play is the radio. I could keep up (mostly) with the Level 1 songs, but following along with a level 3 song was a little (a lot) difficult.

And as much as they swear the game is not targeted to females, with the track selection leaning toward a female’s ear (Selena Gomez & The Scene, Rihanna, the Dirty Dancing soundtrack) and many of your on-screen leads being females, the girls will be more tuned-in than the guys. This is not in and of itself a terrible thing: girls need more games targeted to them. But if you’re trying to buy for multiple kids, know that your boys will probably tire faster than your girls. The major flaw with the game could possibly be attributed to the Kinect, and not so much the game itself – if your Kinect is not perfectly calibrated, Just Dance 4 is prone to knocking off points. Those who may not be experienced with the Kinect may find the controls to working menus frustrating. The biggest problems as reported by S and E, as well as myself, is to find the right title, you have to spin through the track catalog via the Kinect, and it’s not the easiest thing to do. Then you had to push the track button twice, which often the game wouldn’t register as a button push, but a nudge to the next track. There were a few times where we wanted a certain track, and Kinect would register a button push for another track, and trying to correct the problem would result in a second push for that track, so we just kind of shrugged and went with the second track. Again, this may be more the fault of the Kinect, but it certainly was a hampering experience.

The great thing that Just Dance 4 offers that I didn’t expect was re-playability. Accomplishing certain levels or feats on each song will unlock a multitude of challenges, such as Dance Quests, offering challenges to be accomplished within each song, Dance Mash-Ups, which fuses the routine together with dance routines from previous Just Dance games, and Dance Battles, pitting two songs against each other, with the better dancer controlling more time and forcing the second dancer to dance their song longer.

Particularly good dances (or particularly funny ones) can be downloaded to YouTube via the Just Dance TV channel, and new tracks can be downloaded from the XBox LIVE Marketplace (for example, just released include Pink’s “Funhouse,” Katy Perry’s “Part of Me,” or your favorite Korean rap and mine, Psy’s “Gangnam Style”).

I’m not ashamed to admit it: after thirty minutes of “Aerobics in Space” I was dripping sweat to the point where I went running for a bottle of water and a shower. Just Dance 4 busted my ass.

There’s four more weeks until Christmas, and a horde of gingerbread men waiting to attack your gluteus maximus along with their friends brownies, pies, and vodka (at least, that’s on my list). You might want to keep that copy of Just Dance 4 you picked up for your niece and get her something else. Like a Pop-Tart. Or a shoe. Not a pair. Just one. 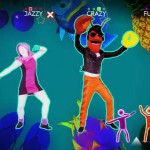 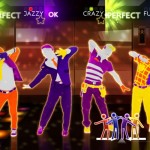 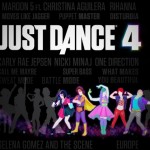 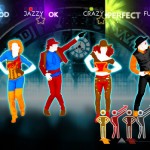 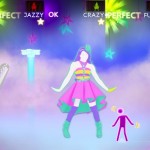 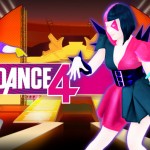 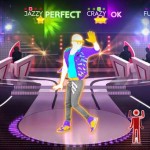 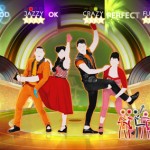 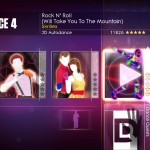