Hearing rumors that there might be a new Family Guy game coming out? There is, and when it does come out, it could be a beautiful day for pie.

Those who get that reference will also know what one of the key elements in the upcoming Family Guy: Back to the Multiverse will be parallel dimensions. And that, in fact, is only an extrapolation from the title; Activision is keeping very hush-hush about the new open-world action game.

Players will be able to play as either talking dog Brian (“I’m the dog. I’m well-read and have a diverse stock portfolio. But I’m not above eating grass clippings and regurgitating them on the rug.” ~ Stewie) or evil baby genius Stewie (“I’m a pompous little anti-Christ who will abandon my plans for world domination when I grow up and wind up settling with a rough trick named Jim.” ~ Brian) as they work to save Quahog from Stewie’s evil-er half-brother Bertram.

Activision has released screenshots from three of the game’s levels: “Handicapable,” which might reference the wheelchair mob from the episode “No Meals on Wheels,” “It’s All Greek To Me,” a Greek-system frat party level, and “Something Amish,” which takes place in – you guessed it – Amish country.

The title will be released for XBox 360, PS3 and PC. Amazon.com has listed the drop date on Family Guy: Back to the Multiverse as September 25. 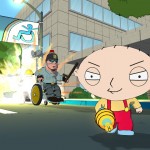 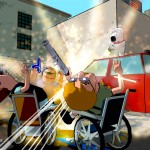 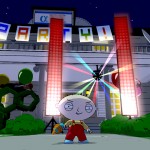 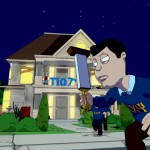 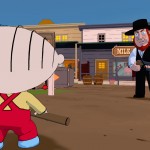 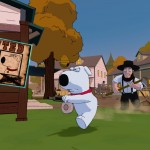 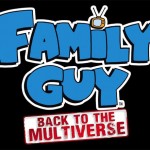