Well we are officially 2 months out from E3, and alas no official tradeshow map is yet available to the public. So with all the information currently available, I decided to take it upon myself to construct one as best I could and boy oh boy are there some interesting developments already making themselves evident.

The main part of E3 is held in 2 huge halls; West Hall and South Hall. Ever since I started attending this popular yearly event three years ago, both Nintendo and Sony have always had their booths occupying the West Hall, with Microsoft being left behind in the South Hall. Well this year, major changes are coming as Microsoft joins the rest of their console making competition in the West Hall. If ever there was a time to keep your enemies even closer, this would be the year to do it. Last year, game developers Capcom and Bethesda were the only other big name game companies occupying the same hall as Sony and Nintendo, but this year, they have both been relocated to the South Hall. This recent development is very revealing at what will be going down at E3 this year. All the console developing companies will be located in the West Hall, and all the big software game companies will be located in the South Hall. Was this done by design or a highly unlikely result of cards falling where they lie?

Late last year, rumors began coming in of THQ’s quarterly profits falling far below their exceeded expectations. And in 2012, the bad news kept on coming with the company laying off many employees. So of course at this year’s E3, it should be no surprise that THQ is nowhere to be found on the tradeshow floor. Is this a further sign of THQ struggling to make ends meet? Or have they pulled the same move Activision did in 2010 by saving on the high cost of not having a booth presence at E3? Only time will answer that question.

Another company who is passing on having a booth on the floor is Atari. I personally thought their presence last year was pretty silly since they had nothing of value worth showing off. But since Nolan Bushnell took over the role of CEO again in 2011, I’m willing to bet money that his restructure of the company involves them saving money by ditching E3 booth space for the time being and coming back later when they’ve got something worth showing off.

With all the huge changes being made to the tradeshow floor, an interesting shuffling of venders has occurred. With THQ gone, their valuable location near the front door of the South Hall has been snatched up by Warner Brothers who has had a great streak of success lately with both their Batman and Mortal Kombat franchises. This is probably a smart move for them considering EA is the first booth that greets you as you walk inside, and they are always packed with a crowd of people. Taking up Warner Brothers vacant spot is Take Two/ 2k Games. In 2011, they were inconveniently shoved all the way to the right hand side of the hall.

Namco/Bandai also moves closer to the front door as they take up Microsoft’s previous spot, causing Tecmo to take Namco’s old booth location. Meanwhile Capcom will take up Atari’s spot right next to Activision, and Bethesda scoops up a large section of South hall located off the beaten path a bit. Previously the location was occupied by many smaller game companies. It’s a toss-up as to if this location will end up being good for them.

The map I’ve prepared here is just a tentative glimpse of where booths will be located. We are still a few weeks off until a final officially released version shows us exactly how much space each booth occupies, but so far the little information we have that’s been trickling out about this highly anticipated event, is very revealing. 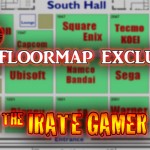 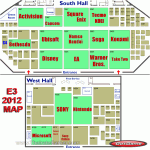 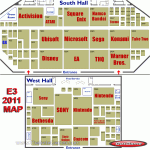